Thrilled to announce that I am now an ambassador for Descended from Odin, a Norse themed sustainable clothing company based in Nottingham.

DfO use only natural or recycled materials and hand craftsmanship whenever possible. They don’t use plastic packaging and 10% from all their sales go to environmental charities.

Check them out here

The September issue of BBC History Magazine is still on news-stands, featuring my article on forgotten battles of the Viking Age. I was delighted to make it onto the cover: 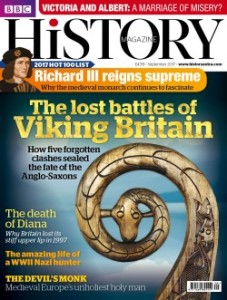 Here’s an extract from the pre-publication draft:

‘King Ecgbehrt (Egbert) of Wessex was not a man to be trifled with. In 825, he had established himself and his kingdom as the pre-eminent power in Britain, crushing the Mercians at a place called Ellendun (just outside Swindon). It had been a memorably bloody business. A fragment of poetry recalled that ‘Ellendun’s stream ran red with blood, was stuffed up with corpses, filled with stink’. This, however, was only one front in Ecgbehrt’s campaign to subdue the other kingdoms and peoples of Britain. In 815, he had raided Cornwall ‘from east to west’ – a reminder to the still independent Cornish kingdom of the limits of their autonomy. In 838, however, the Cornish decided that the time had come to push back against West Saxon domination. This time they had allies – Viking allies.

The Anglo-Saxon Chronicle records that a ‘great ship-horde came to Cornwall’ which combined forces with the native Cornish and immediately set about challenging King Ecgbehrt’s power. Ecgbehrt led an army into Cornwall, bringing his strength to bear at a place called Hengest’s Hill (Hengestesdun). This was most probably Kit Hill, the massive prominence that dominates the valley of the Tamar, one flank of which is still known as Hingsdon (Hengestesdun). We know very little about what happened, except that the Vikings and the Cornish were put to flight. This, it would transpire, was to be the last gasp of Cornish independence. The people of Britain’s south-western peninsula would never again pose a military threat to the Anglo-Saxon kingdoms. The same cannot be said of their erstwhile Viking allies.

Since the 790s, Viking fleets had been striking from the sea without warning, raiding monasteries and coastal settlements and capturing slaves and treasure. By the 830s, these attacks had become increasingly brazen, targeting substantial settlements like Carhampton in Somerset and defeating Anglo-Saxon armies. But this was the first time (that we know of) that Vikings had marched to war alongside a native people in Britain. Although (and sadly for the Cornish) it was not a successful experiment, it would certainly not be the last.’

This evening BBC Scotlandwill be airing the first part of a new series investigating the Bannockburn battlefield. The series is obviously timed to coincide with interest in the battle arising from the Scottish independence debate and coming referendum, but work to precisely locate the site has been ongoing for some time. The series promises to shine a welcome spotlight on a still emerging branch of archaeology and the challenges associated with locating (and protecting) locations that have a powerful resonance in modern political engagement with the past. If the site of Bannockburn can be identified with  security (and archaeological proof) then it will join the tiny corpus of pre-Civil War battelfields in Britain that can be identified archaeologically, alongside Bosworth (1485) and Towton (1461). The series is presented by Neil Oliver and Dr. Tony Pollard, director of the Centre for Battlefield Archaeology at Glasgow University. The latter’s involvement should ensure that the series is sensible and insightful, and recalls the days when the pair presented the battlefield archaeology programme Two Men in A Trench before Neil Oliver’s ascent to the dizzy pinnacle of archaeo-presenting megastardom.

The website has lots of content, and several entertaining clips of people hitting each other with authentic looking fourteenth century hardware. Excellent. 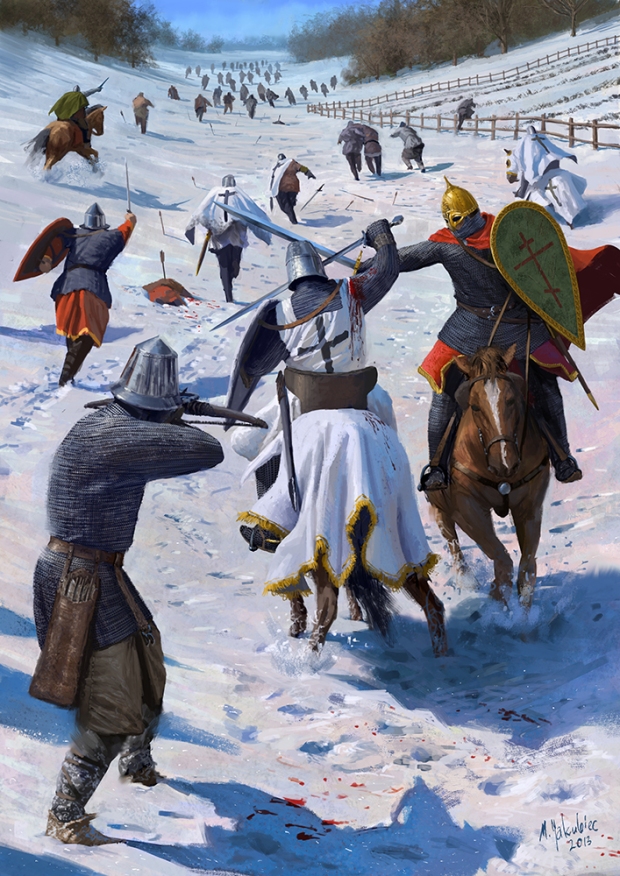 I have just recently had another article published in Medieval Warfare magazine, this time – in a bit of a departure from my usual sphere of study – on a battle that took place in the context of the northern crusades that pitched the forces of Catholic western Europe and Scandinavia against the Pagans and Orthodox Christians of the eastern Baltic and beyond. In this case the belligerents comprised the armies of the Russian city states of Novgorod and Pskov (and elsewhere) pitched against a combined army of Danes, Teutonic Knights, Estonians and other crusading forces – perhaps from Germany.

The article is triumphantly illustrated by Milek Jakubiec. The scene depicts the single combat supposedly fought between the Lithunian-Russian Prince Dovmont (Daumantas) of Pskov, and the Master of the Livonian Branch of the Teutonic Knights, Otto von Lutterberg, during the rout of part of the Catholic army. This may or may not have happened, but it certainly makes for an exciting scene to illustrate the battle.

The magazine is full of interesting material relating to the life and times of Alexander Nevsky, prince of Novgorod and hero of Sergei Eisenstein’s epic film that depicted the Teutonic Knights as proto-Nazi invaders. Absolute propagandist bosh of course, but stirring stuff nonetheless! 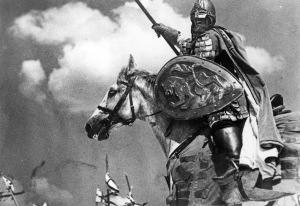 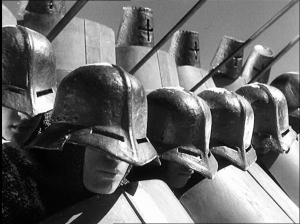 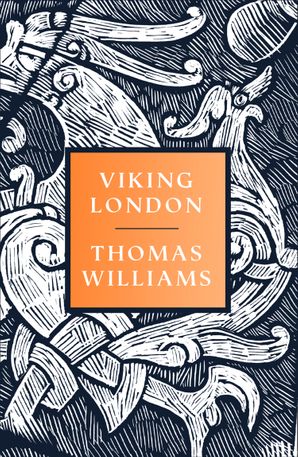